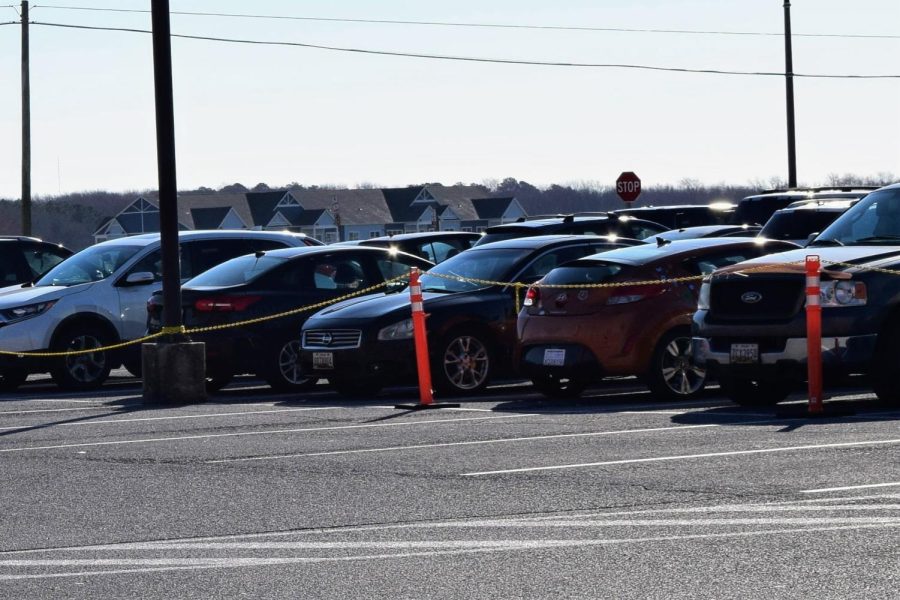 It’s 2:40 p.m., and students are rushing to their cars in hopes to smoothly exit the lot in a timely manner. The reality of this comes with aisles blocked off with other cars, and parents trying to maneuver through the student section to get out faster.

“The parking lot is the part of my day I dread the most,” said senior Abby Stone. “I sit and wait to pull out and leave and there are parents who sit in the middle of the lanes waiting to pick their kids up.”

Students here at Stephen Decatur High School have the privilege of being able to drive to school. For $20, students can purchase a parking pass for the privilege of using the school parking lot. With this, however, comes the downsides of facing the common problem expressed by the students, which is that there is too much congestion in the student parking lot.

Parents who drop their kids off at school, as well as picking them up at the end of the day, get into the habit of taking advantage of the parking lot to get out of the pick-up lines faster. They sit in each aisle of the lot to potentially skip the traffic.

As a result, students are frustrated, because they are often stuck in their spaces as parents take over the already cramped lot.

If all parents were to stay in the lane the crossing guards direct them to, the traffic problem would be greatly minimized, Stone said.

“It’s very selfish what the parents are doing, and the parking lot definitely needs to be expanded with the increasing number of underclassmen who may have their licenses next school year,” she said.

Stone added that the parking lot problems may only worsen because this year is carrying the largest number of freshmen ever at Decatur. She also suggested that cameras get installed in the parking lots due to multiple accidents and hit-and-runs becoming a bigger issue.

These issues are not going unnoticed by administration. Assistant Principal Curt Bunting said that he and his fellow administrators, as the school resource officer, had to find a way to get traffic moving.

“We may have to open the field hockey practice field area for future parking for students who decide to drive,” Bunting said. “We do have parking spots available but we know in the spring we will have more students parking.”

Bunting further explained the fact students are frustrated getting in and out of the lot, and how parents make it difficult for students to smoothly find a spot. He said it’s easy for parents to get into the parking lot, but that makes it harder for students to navigate.

When asked about students coming to him to address problems they have been facing as far as parking, Bunting said, “I get complaints of ‘I like this parking spot because I’ve parked here since September’ but its first come first serve.”

With COVID-19 causing an uptick in parents choosing to bring their kids to school, Bunting explains it causes a “big time traffic jam.”

“The next phase will be what happens when we have more juniors who decide to drive,” he added.

As more students begin receiving their licenses, relying on the lot to provide enough space for everybody becomes difficult. Opening up the gate to the practice field is a direction this problem would be headed.

Fighting for a parking spot in the morning is a struggle for late-arrivals. Parking spots are limited as it is, and open spaces tend to be where parents are exiting the lot, which are blocked off during the morning rush. Timing is everything. To ensure a guaranteed spot that is not totally out of the way, arriving earlier than even the first bell is something that students have to do.

Senior Cameron Taylor said arriving early can eliminate the stress of finding a spot, but being able to come early is not always possible.

When asked about the struggles of leaving at the end of the school day, Taylor said, “you usually have to wait 10 to 15 minutes if you park in the back because traffic moves so slowly. The combination of students and parents, and even buses cause traffic to be backed up. The light at the intersection also takes forever to change, which makes leaving the school even harder.”

Miguel Cervantes, a senior, leaves school after second period, which he said prevents him from coming into traffic troubles. Parking in the first row is not a problem for him, and leaving the school is even easier.

“I don’t ever have trouble finding a spot, and I don’t come any earlier to prevent it either. Being able to have half days definitely helps me not come into contact with the affects of leaving when everyone else does,” he said.