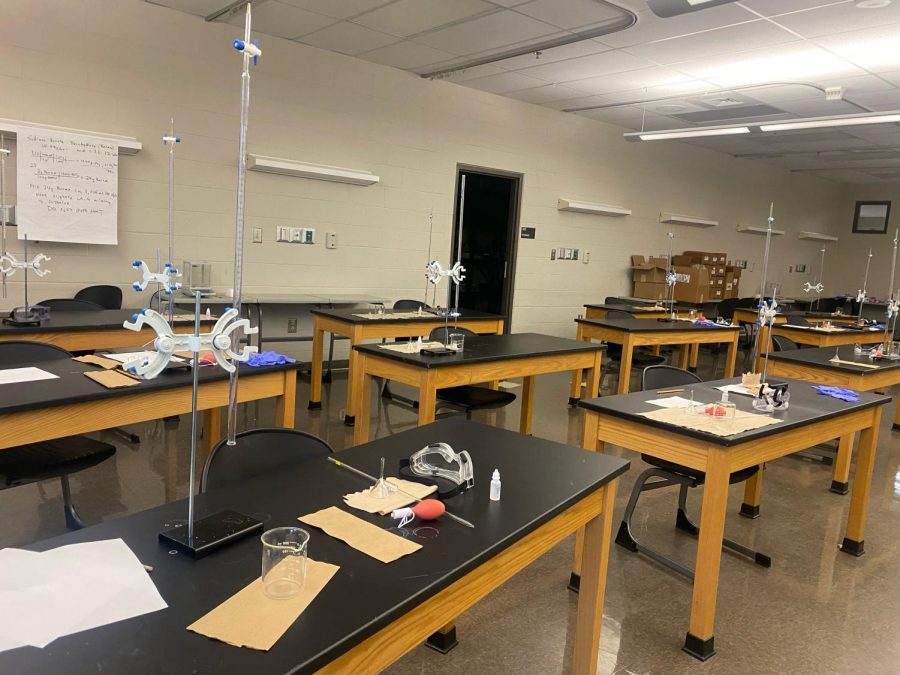 The labs at WTHS mentioned by Gracie Reister

America’s education system is one full of diverse and unique pathways that a student can choose to take, one of the biggest pieces coming into play being school choice.

This key factor in a K-12 education is commonly clouded by misconceptions and a biased look at the information.

The private versus public school debate is not a new topic, and is one that many professionals doubt can be settled, because the playing field is anything but level.

These two very broad categories of schooling are barely comparable when all factors are considered, looking at schools of various sizes, across both coasts, and schools of differing purposes.

Some light can be shed on these misconceptions using broad national statistics, as well as students personal experiences, and a brief history of these educational institutions to paint a picture of our current educational culture.

The first schools in colonial America were private institutions. The Roman Catholic Church created schools to prevent Protestant indoctrination, and the upper class and financially elite established schools similar to ones in Europe for their children.

Public schools were only introduced as a means to even the playing field and attempt to create equal opportunity. This idea has been impossible to accomplish due to the varying types of private schools, their locations, and who has access to them.

While the number varies slightly from expert to expert, there are approximately 15 different types of private schools between the different religious foundations, college preparatory, STEM, military, special education, and alternative.

To further illustrate the standing between private and public school, it’s important to note the demographics of their comparative student bodies. Roughly 46 percent of private schools nationally have a minority population of less than five percent, according to the Brookings Institution think tank.

There is a different demographic among parents as well, with a majority of private school families having a minimum of one parent who received a post-secondary education.

Eighth-grade private school students reported that at least one of their parents had gone further in their educational career, according to a study published in the book “50 Myths and Lies that Threaten Americas Public Schools.”

“The vast majority of the kids at my private school did grow up super rich, and do have super nice things and big houses, and dads and moms that work as surgeons or, you know, people in big business,” said Ava Wilsey, a junior at Worcester Preparatory School.

There are exceptions to such privilege, which can be found at nearly every private school in the country. Wilsey shed light on a small group of students at her school who are enrolled under financial aid scholarships, or another relative is supporting their tuition, or were admitted because their parents are employed there.

The majority of American students are enrolled in public schools, where the student body is much larger and more diverse than a typical private school.

It is a fairly common practice for families to switch between private and public school. It’s equally as common for students to remain in one form of schooling throughout their early educational career. The reasoning behind these decisions varies greatly from family to family. This creates very unique experiences and perspectives for the two sectors of education.

Stephen Decatur junior, Tatum Vorsteg, a former MBS graduate who attended Ocean City Elementary school explains, “They had heard some of the stories about different teachers at BIS and the middle school…” and “my sister actually had a year at BIS and she got bullied a lot and would come home crying like every day so they decided to put both of us at MBS”

Personal experiences with older siblings are not the only contributing factor to decisions regarding which schools to send your children to. A good amount of these factors come from something nicknamed “the private school effect,” which affects the views of both private and public-school attendees. Private school students are statistically more likely to express and feel positively about their schools. Their projection of this positivity is something likely to influence their community, both within their school and outside of it.

Through this “private school effect” is where most misconceptions are formed. For one thing it is a common assumption that public schools have less or even an outright lack of resources. Here at Decatur, students have access to the Worcester Technical High School (WTHS), dual enrollment options, and all SDHS’s faculty and staff. One Decatur student who also attends WTHS as well as regular classes at Decatur Gracie Reister was asked about her opinion on the resources we have access to said:

She also commented that she has never seen a lack of resources within her required and core classes at Decatur such as textbooks, calculators, and the iPads, chargers, and apple pens the school provides to its students.

One question a lot of people have is what difference uniforms provide in an education. The most obvious purpose being to provide uniformity and take the distraction of what you’re wearing out of your learning environment. But how big is the role they play? Tatum Vorsteg sites uniforms as her biggest adjustment in transitioning from private to public school.

“I never had to worry about picking out my outfit in the morning,” says Vorsteg. “I definitely do find myself being worried about being dress coded but that is because I did get dress coded multiple times for being out of uniform at MBS.”

She explained that these dress coding offenses could be issued for things as small as nail polish, mascara, or even just the wrong socks. An idea that seems relatively foreign to most public school students given the current controversy over dress codes in buildings across the country.

Another thing mentioned by both Vorsteg and Wilsey are rumors of drug use and fights in increased numbers that occur in public schools.

“…we definitely heard some of the stories that were true,” said Vorsteg. “They told us there would be more peer pressure, drinking, and drugs and stuff.”

Some of this is due to getting older of course, because the temptation and access to substances increases as you progress through grade levels. But in regards to statistics and that crucial word access this idea falls partially under the category of misconception.

“I always grew up hearing about drug problems in public schools, and fights and stuff, which I know from good sources are both issues in public school, but I’ve always thought they were blown out of proportion,” says Wilsey.

Statistics show a variance in drug use between individuals who attend private and public school and the abstract of a study done by researchers at the University of Michigan cite school type as one of the main contributing factors to the discrepancies. The study also states that students in eighth and twelfth grade enrolled in public school are more likely to be cigarette smokers than their private school counterparts, and that public eighth graders are at higher risk for alcohol and marijuana use. At younger ages drug use occurs in higher numbers in public schools, but its our futures these schools are preparing us for after all.

A study that followed high school seniors through college until they turned 27 showed those that attended private schools were more prone to drug use post-graduation and carried addictive tendencies with them into adult hood.

Co-author of the study Professor Suniya Luthar refers to the private schools they studied in the New England region of the US as “pressure-cooker, high achieving schools” and considers their attendees to be in the group “at highest risk for alcoholism and addiction in adulthood.”

This is attributed to the increased pressure on individuals in private schools to succeed, socioeconomic status, and resources they have access to.

The complexity of these two types of learning is almost impossible to get an accurate and full picture of. While it is arguably one of the biggest pieces of it, school choice is also not the only factor to Americas educational road map. School funding, curriculum, access, goals, locations, sports, recruiting, etc. all add to the metaphorical geography of it.

There is no doubt that this comparison and debate will remain long standing, however the question in the future will hopefully be raised about the fairness of it, with considerations to the factors that make up the grounds for their comparison.