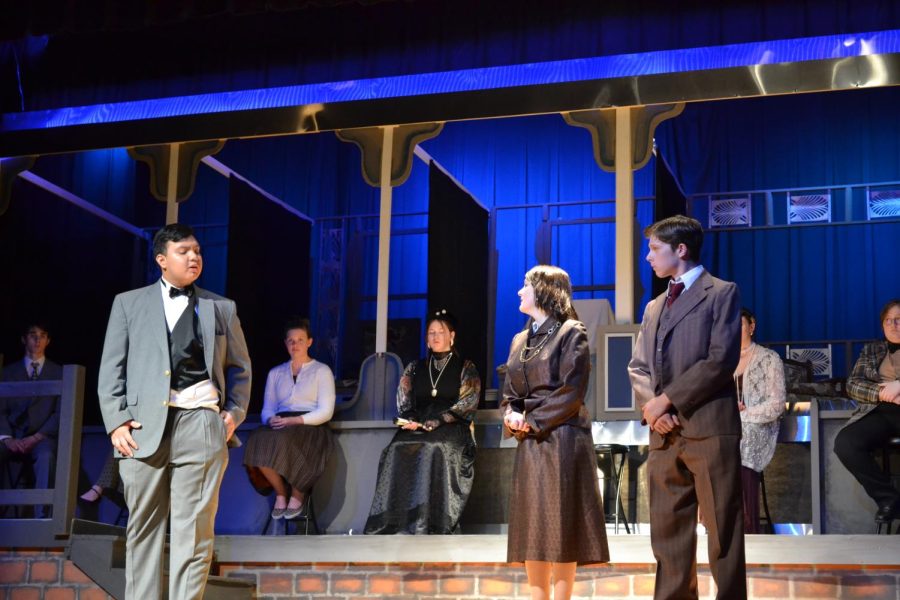 Amidst the murder of a prominent American millionaire, nobody is safe from suspicion — or being next, on the Orient Express.

In a seamless blend of suspense, thrill, and morbid humor, Stephen Decatur High School’s theatrical production of “Murder on the Orient Express” adds its own unique touch to a classic murder mystery.

Adapted by Ken Ludwig from Agatha Christie’s acclaimed novel, the play follows Belgian detective Hercule Poirot as he works to solve the murder of Samuel Ratchett, a wealthy businessman who was found stabbed to death in his own train compartment. Detective Poirot is traveling from Istanbul to London on the Orient Express when a snowstorm forces the famous passenger train to skid to a stop.

At the same time, wealthy businessman Samuel Ratchett has not been heard from in his room for hours. When he doesn’t respond, the conductor and other passengers kick the door open, only to find that the tycoon has been stabbed several times, his killer nowhere to be seen. Poirot must move quickly to catch the culprit before they strike again, but no passenger is completely in the clear.

The case is not so cut-and-dry, as Poirot discovers that this crime is also intertwined with the murder of young heiress Daisy Armstrong five years ago. Faced with conflicting clues pointing to every other direction and a startling revelation about the victim, the detective finds that this case is unlike any other.

The play’s strength lies in its interesting plot and engaging cast of characters, brought to life by the actors. I found the flirtatious widow Helen Hubbard to be one of the most entertaining, her audacious personality well-portrayed by Weeks’ performance. Swedish missionary Greta Ohlsson also became a personal favorite, her dramatic lines adding to the play’s humor. Each character has their own unique story and reason for boarding the Orient Express, revealed one-by-one then tied together by Poirot during the climax.

The stage and sound elevated the entire play. Its set was well-designed and captured each scene with detail, highlighted by the clever use of lighting which even imitated train headlights. As well as the lights, every moment of tension was accompanied by fitting violin music.

Overall, this year’s play was excellent. It’s clear the cast and crew worked hard to make this a success, being the second live production since the pandemic. Several cast members also worked on set design, lighting, sound, and costumes. Every actor was fit for their role and made it their own, all combining to create a stellar rendition of “Murder on the Orient Express.”