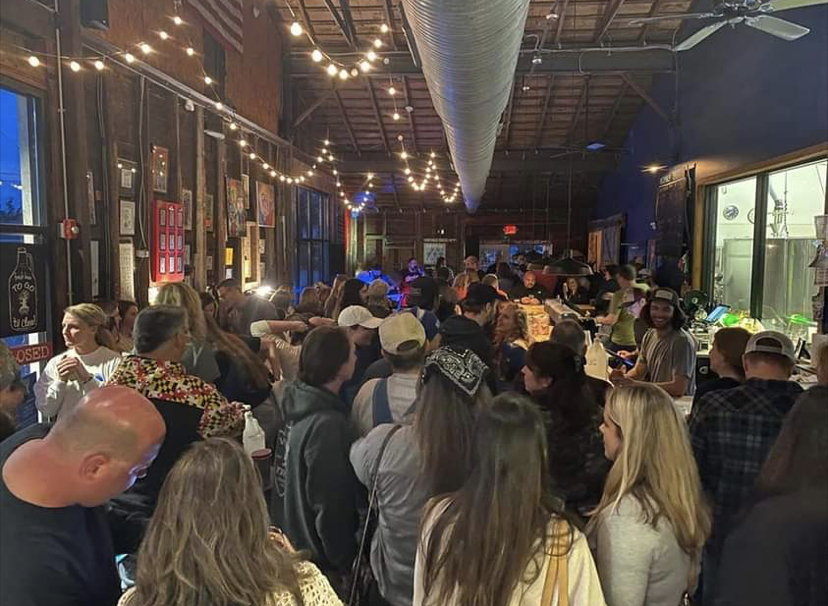 Dozens of people showed to support the SDHS fundraiser at Burley Oak Brewing in Berlin on April 4.

Organized by teachers Gregory Caldwell and Joshua Wilder, the Berlin community gathered at the brewery for a craft beer festival on April 4. The fundraiser held raffles where guests bought tickets for a chance to win, along with door prizes and several auctions. The largest item – which contains a Malibu surfboard, a two-night Ocean City hotel stay, a deep-sea fishing trip, and several more prize – is currently going for $2,600.

The fundraiser had been in progress for two months, during which Caldwell and Wilder worked with local restauranteurs Jeremy Brink and Mike Latona to plan the event.

“I called around 60 to 70 area businesses about donations for the raffles, then had to book a band and put together advertisements. We also had a GoFundMe to help pay for the whole thing. There was a lot to do, but I feel it definitely paid off,” Caldwell said.

The event raised more than $6,000 in total with a turnout of about 400 guests. Accompanied by live music and food, Caldwell and Wilder served as bartenders, while guests participated in the auction and raffles.

“Everybody was amazed by how well planned it was, and how fun it was for everyone. We got a lot of good feedback,” said Caldwell.

Caldwell, a long-term substitute, and Wilder, a technology education teacher, were inspired to organize their fundraiser after Stephen Decatur organized another one in support of Lakelynn Draheim, the daughter of math teacher Lance Draheim, who is battling a brain tumor.

“It was about two months ago when we got the idea. We heard about Lakelynn, and that got us thinking about the other kids here who might need help too. We knew two with cancer, and then we found out about a third. We wanted a way to support our own students while also bringing people together for a fun event,” Caldwell said.

Of the $6,000 raised, the families of the three students received 50 percent of tips, 10 percent of sales, and half of the proceeds from the auction and raffles.

“It’s great seeing everyone come together to help our kids. We may be a big town during the summer, but when it comes down to it, we’re just a tight-knit community that always tries to be there for each other,” Caldwell said.