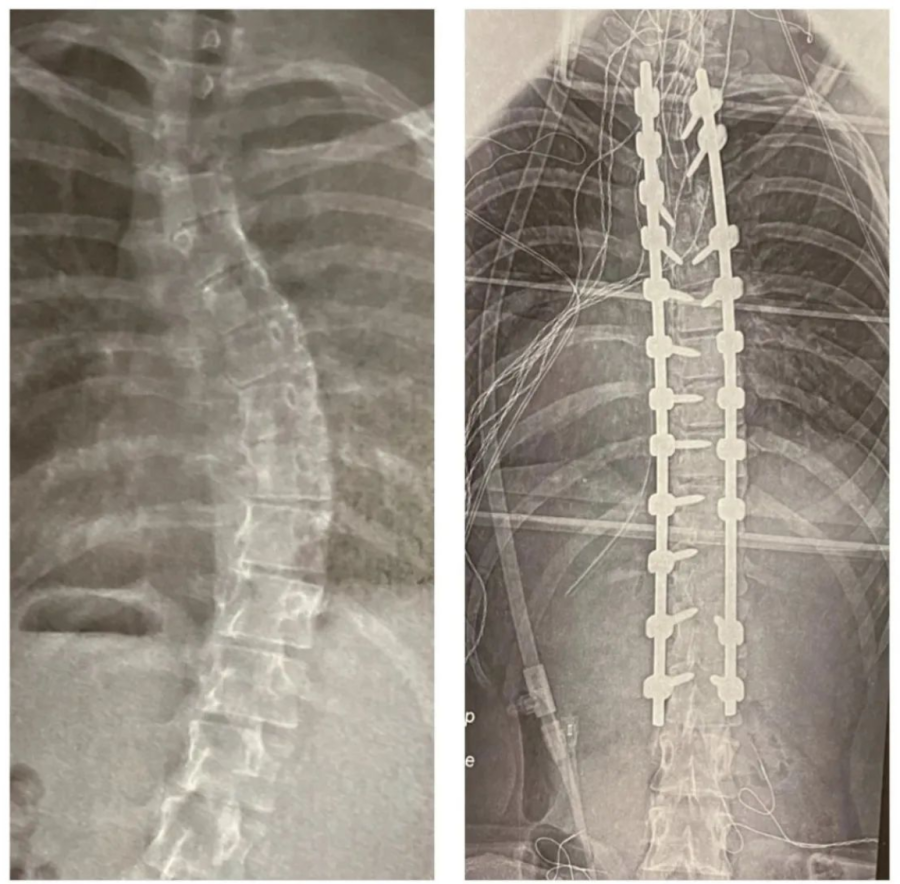 Before and after X-ray imagery of Zach Powers' surgically-improved spine.

The last thing anyone wants to hear from a doctor is the news of needing urgent surgery.

In November 2021, I was told I would need spine surgery for my scoliosis condition. This news came as a shock because, just a year prior, I was told I had a high likelihood of not needing surgery in my future. That assessment was wrong. Instead, my spine curved another 15 degrees, roughly.

I lacked any real emotion from the news; rather, I sat in amazement and confusion as to why and how this was happening. It didn’t really frighten me, though, at the time, as I didn’t really know how to cope with the news.

The reality of my situation never really dawned on me until I was staying in an overnight hotel the night before the surgery. It was hard to imagine what life post-surgery would be like, since I had no precedent for an event like that. My largest fear was not the surgery itself, but the thought of what comes next, or so I thought.

The morning of the surgery was something I don’t think I will ever forget. From 6 a.m. to 8 a.m., I maybe spoke a total of 50 words, mostly consisting of “yes” and “no.” I couldn’t speak, I was shaken to my core, and I wasn’t ready for what was to come.

Laying down in a hospital bed with my mom by my side and my dad in a different room because of COVID-19 policy was hard. I was becoming pale and unresponsive from the anxiety. It is hard to describe the feeling of laying there helpless and scared. The nurses and staff did try the best they could to ease my mind, but it did little help.  To be completely honest, the kid also preparing for surgery next to my pod, who was maybe 7 years old, was handling it better than I was. The nurses gave me some meds that would calm me and relax my nerves to better prepare me to enter the operating room.

I said my goodbyes to my mom and they began rolling me to the operating room. The doctor tried to get me to think about other things, so he brought up a basketball game that had happened the night before. I’m not a huge fan of basketball, so in my head, I thought about how dumb it was for him to say that. But, now that I reflect, he did exactly what he was supposed to do – I was so busy thinking about why he would ask that question that it took my mind off surgery for a while.

Entering the operating room was surreal. Doctors and nurses everywhere, all with individual responsibilities and tasks to get me ready. All I could do was stare into the abyss that was the ceiling, and lay there frightened.

They quickly placed a gas mask over me that released the smell of watermelon. Before I knew it, the anesthesia nurse had a needle in her hand,  told me “this may pinch a little.”

That would be the last thing I remember from that operating room.

After nearly 11 hours, I woke up in my recovery room with both of my parents by my side and nurses on the other. I couldn’t really feel my body, the meds had mostly prevented any pain or feelings.

While the first two days are hard to remember, I do remember how hard it was to lift my hand to even look at my phone or keep my head up for longer than five seconds.

Most of my hospital recovery is a blip in time for me. It is hard to remember anything not too significant. The meds had completely sedated me. This did help most of my time in the hospital.

The best part about the hospital stay was probably the Winter Olympic Games, which coincidentally happened at the same time my surgery took place. Thankfully, it kept me occupied in my room, since I don’t find anything else on TV that interesting.

My most memorable moments were my worst moments. The bandage on my back was weirdly positioned, so when I was laying in bed it felt like I was constantly sliding or falling. It was so uncomfortable and felt like I was being tortured.

On top of that, the nurses had to check on my vital signs every hour. This sounds great and all, but when I tried going to sleep, I almost immediately would be interrupted by them or wake up. Most nights I was sleep-deprived and in pain.

By day three, they needed to get me walking and on my feet. It is quite odd standing up after spending three days in bed and trying to walk. I could barely pick my feet up, and the nurses more or less dragged me down the hall. It wasn’t painful, just difficult. I would do this for the next two days I was in the hospital to prepare for my return home.

My recovery at home was hard, but more bearable than in the hospital. Every day, I slowly got better and was able to pass time easier because of my computer. In a similar way to the COVID-19 era school, I did my work online for my classes. I stayed in my house for nearly two months. I wasn’t allowed back to school until early April.

My life is returning to normal now, despite my full recovery being another four months away. I do not regret anything, as this surgery has prevented a future of pain and difficulty. It was hard, but I ultimately overcame it and I am moving on with my life.