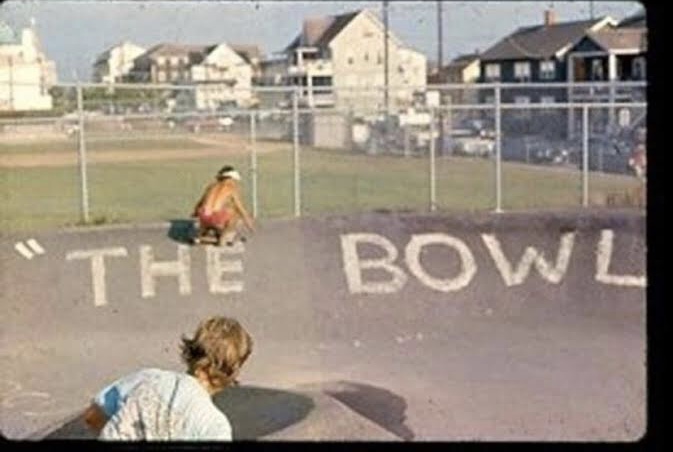 After the ban of public skateboarding in 1970s Ocean City, local kids were left with no where to do what they loved. Kids who once spent their winters skating the drained hotel pools and up and down downtown Ocean City with friends were no longer allowed. At the start of skateboarding’s rising popularity, it was just as quickly being killed off.

Hoping for a way for her three teenage sons to keep enjoying their skateboarding hobby, Ocean City local Dorothy “Haystack” Marlowe stepped forward. She encouraged the town to build the popular skatepark location that would shape Ocean City’s identity.

“Haystack, she was the driving force that got that place built, she’s what made it happen,” said Pat Truitt, who grew up in downtown Ocean City and was among what would be the first generation of skaters at the bowl.

This past June marked the 45th anniversary of the Ocean Bowl Skate Park’s opening in downtown Ocean City. Consistent support from both the town of Ocean City and the local community has kept the park running since 1976, making it the oldest municipal skate park in the country. This title has made the park an exciting destination on many skater’s lists.

Over the years, the Ocean Bowl has become so much more than a local skatepark to numerous Ocean City residents. The Third Street and St. Louis Avenue location has become a landmark in the community as well as the origin of countless fond memories for skaters.

“I think everybody has the same opinion. It was a real, second family kind of oriented scene, everyone was close. You knew what you were walking into when you went down to the bowl,” Truitt said.

Today, the 57-year-old Truitt lives in Southern California, where he runs Brand-X-Toxic Skates, a company which grew out of Atlantic Skates.

Jack Crosby, another concerned and supportive local as well as an art teacher at Berlin Middle School during that time, designed a clay version of the bowl to present as a model.

“Jack was my art teacher – all of ours,” said Truitt, laughing. “He was a great presence. Jack built that huge model of that bowl, his physical rendering is what made that layout.”

Once the bowl had been built, a steady influx of kids came in and enjoyed having a place to skate. The 1970s were the start of skateboarding’s popularity after the creation of the sport in California in the 1950s.

As skating’s popularity on the East Coast grew, interest in the skate bowl did as well. It was not uncommon for it to be the site of skate contests that would attract skaters all up and down the East Coast.

Marc Emond, 59, is another Ocean City native who was a first-generation of skaters at the park. Skating was such a large part of his life, from 1980 to 1994, Emond ran the park. During his time running the park, he was able to witness the changes in popularity of skating and the demand for local parks in different areas.

“The Ocean Bowl is original. It set a standard for people all over the country,” said Emond. “People would call there and ask how we did this, how we started a skate park. And now they’re everywhere.”

The number of skateparks has grown a large amount since the 1970s and the first public ones were built. In Ocean Pines they opened their own skatepark in 2009 after it had been in planning for a few years. The town of Berlin has been considering their own park for the last few years as well.

Emond compares the way towns view skateparks now to community pools. They are viewed as something that’s expected in a community, something positive for kids.

“The Ocean Bowl was the start of this whole movement of community skateparks,” he said.

Throughout all this time, though, other skate parks have come and gone. In the last 45 years Ocean City has had a handful of private parks that have closed down, yet Ocean Bowl keeps going.

Emond believes the driving force keeping it open is the fact that it did not need to show a profit. It just needed to be there for the kids in the town. He explained that not every kid is meant to be on a softball team or a soccer team, but sports like skating were more for them.

“There’s a place for these kids to fit in that don’t really fit in to team sports,” said Emond.

Mark Hordeman skated the bowl when it had just opened. He can recall a time when he was skating on a makeshift board from an old skateboard his father had bought from a hardware store for moving items around. He’s yet another example of someone who found lifelong friendships through the park.

Hordeman still lives in Ocean City and remains very involved with the park and keeping it in good condition for the newer generations. He and others working to make improvements with the park would like to bring in professional skaters once again to “keep the town alive” as he puts it, despite the lack of support from Ocean City.

“Right now we’re fighting to make it a little larger,” said Hordeman. “They say they are, they say they’ve got the money for it, but they’re just doing nothing.”

Professional skaters have visited the town in the past with different events. Having a skate park in a small, surf town creates a special dynamic as well as adding to the tourist attraction. So much so, that the Dew Tour, a large competition of the best skaters, snowboarders, and skiers, was held in Ocean City from 2011 to 2014.

In the past, the park received needed repairs from the town of Ocean City when the Dew Tour was first coming to the area. But, before those repairs even, large renovations were made.

In 1984 the ‘big bowl’ was removed due to wear from tropical storms sweeping the area and then in 1997 what was remaining of the original Ocean Bowl was taken out, leaving the park that exists today.

Now, there lies one large bowl with both a deep and shallow end, as well as a small bowl. There are two ramps and a concrete street course. Though the park is far from what it started out as, the same spirit remains.

The Ocean Bowl is an example of a time where something that started out small turned out to be monumental. Whether that be found in the lasting memories it has left with so many, or the significant mark it made in skateboarding history.

“I couldn’t imagine myself doing anything else. We all became a skateboarding family down there. I’m still friends with most of the people from that era,” said Hordeman.